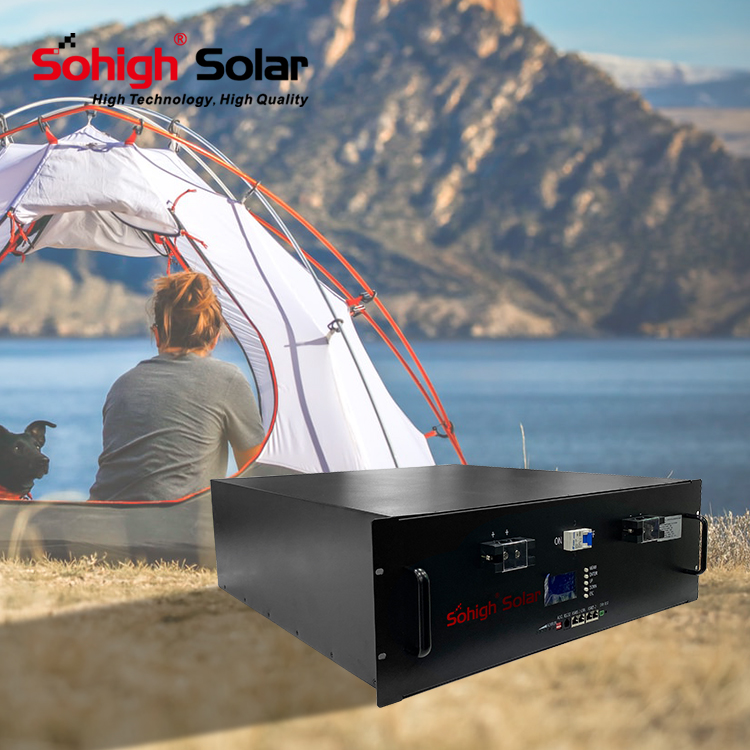 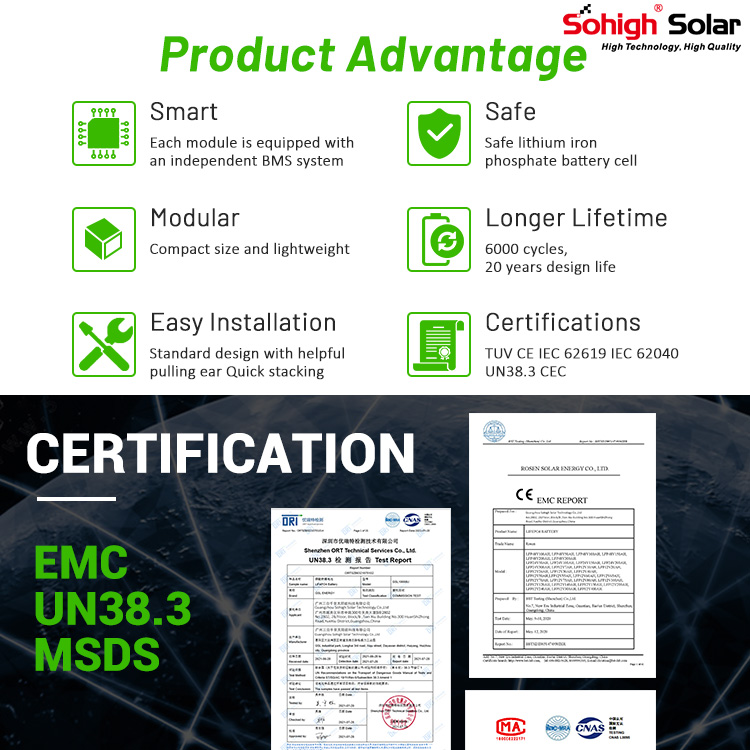 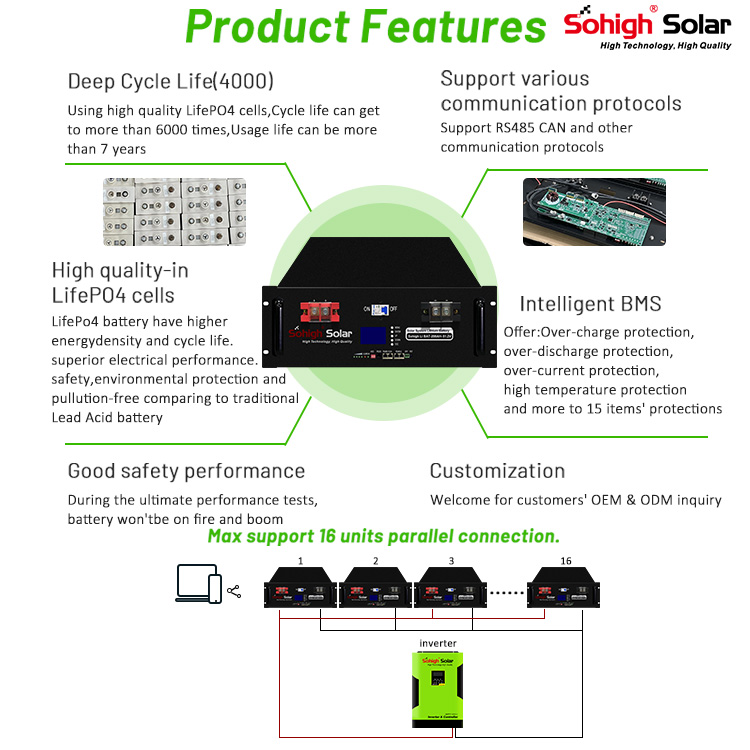 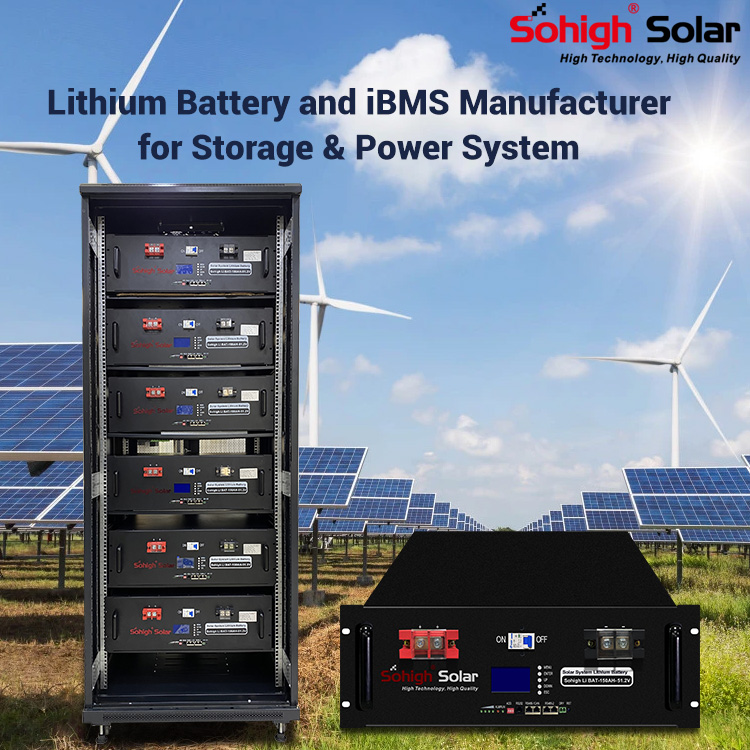 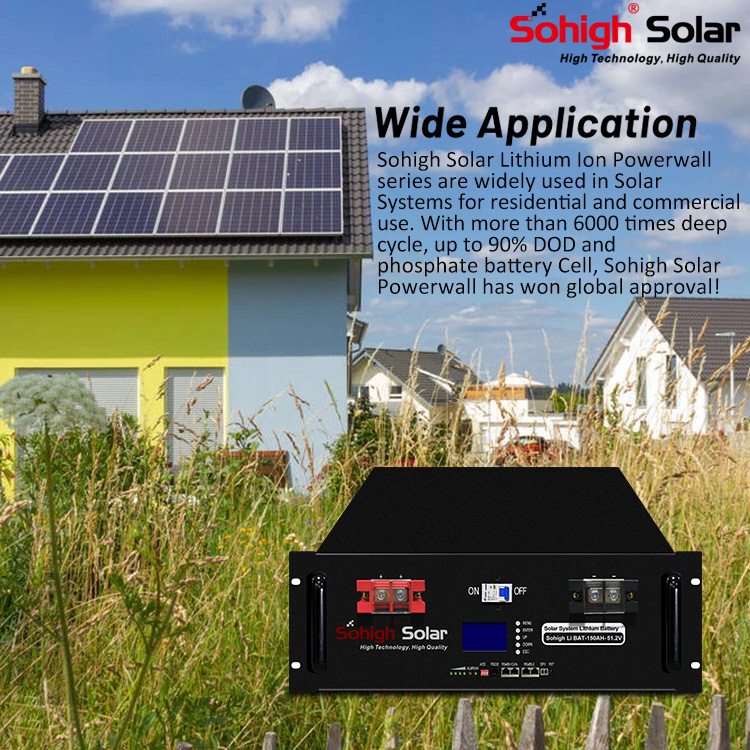 Sohigh Solar 51.2V150AH Battery is a state-of-the-art lithium battery that works at 51.2V with integrated BMS module for remote control

The Sohigh Solar 51.2V150AH 7.68kWh lithium battery has an intelligent BMS module that allows administration, centralized remote support and battery monitoring (voltage, current, temperature of the cells and of each module, overload protections, etc.), and administration and remote maintenance of the battery, in this way the balance of each cell is achieved and the current is limited during the charging process to ensure the safety and efficiency of the battery.

It is a LiFePO4 battery (lithium iron phosphate), so its internal technology has all the advantages inherent in the latest generation lithium batteries.

The Sohigh 51.2V150AH 7.68kWh lithium battery is of high energy density and light weight compared to other batteries in the market with similar technical characteristics.

Its internal technology enjoys a long service life even when its usual use of deep cycles.

It is a battery with a fast charge capacity compared to other batteries of a similar range, so waiting times are minimized.

The 51.2V150AH 7.68kWh lithium battery has an integrated battery management system (BMS) that by controlling the temperature, voltage, etc. guarantees both the safety of the accumulator and the integrity of the other connected elements, optimizing Battery operation at all times.

The front of the battery incorporates an LED light that indicates the percentage of remaining energy autonomy.

The Sohigh Solar 51.2V150AH 7.68kWh battery has a low self-discharge rate and no memory effect.

This battery does not emit gases during operation or at rest, which allows you to install the battery inside the home if you wish.

Although the above points define the character and operation of the battery, without a doubt the characteristic that makes the Sohigh Solar 51.2V150AH 7.68kWh lithium battery one of the most efficient in the market is its discharge capacity as this battery is capable of discharging 100%, since its useful capacity and real capacity is the same, something that does not occur in other lithium batteries.